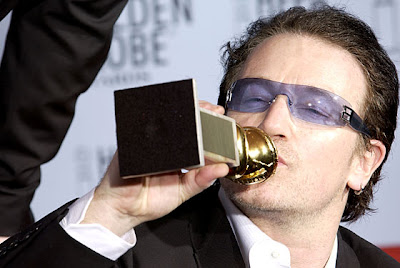 A federal appeals court struck down a Federal Communications Commission policy on indecency Tuesday, saying that regulations barring the use of “fleeting expletives” on radio and television violated the First Amendment because they were vague and could inhibit free speech.

NBC broadcast an expletive by the singer Bono at the 2003 Golden Globe awards.
The decision, which many constitutional scholars expect to be appealed to the Supreme Court, stems from a challenge by Fox, CBS and other broadcasters to the F.C.C.’s decision in 2004 to begin enforcing a stricter standard of what kind of language is allowed on free, over-the-air television.

The stricter policy followed several incidents that drew widespread public complaint, including Janet Jackson’s breast-baring episode at the 2004 Super Bowl and repeated instances of profanity by celebrities, including Cher, Paris Hilton and Bono, during the live broadcasts of awards programs. The Janet Jackson incident did not involve speech but it drew wide public outrage that spurred a crackdown by the F.C.C.

In a unanimous three-judge decision, the Court of Appeals for the Second Circuit in New York said that the F.C.C.’s current policy created “a chilling effect that goes far beyond the fleeting expletives at issue here” because it left broadcasters without a reliable guide to what the commission would find offensive.

But if the commission decides to appeal the ruling — the latest in a string of court decisions questioning its ability to regulate media — it almost certainly runs the risk that the Supreme Court could reverse longstanding precedents that subject broadcast content to indecency standards that are not allowed for any other media.

Julius Genachowski, the chairman of the F.C.C., said in a statement that the commission was “reviewing the court’s decision in light of our commitment to protect children, empower parents, and uphold the First Amendment.”

In a statement, Fox said it was extremely pleased by Tuesday’s decision. “We have always felt that the government’s position on fleeting expletives was unconstitutional,” said the company, a unit of the News Corporation. “While we will continue to strive to eliminate expletives from live broadcasts, the inherent challenges broadcasters face with live television, coupled with the human element required for monitoring, must allow for the unfortunate isolated instances where inappropriate language slips through.”

The case, known as Fox Television Stations Inc. v. F.C.C., has already been to the Supreme Court on a technical matter that did not involve its constitutionality. In 2009, the justices ruled that the F.C.C.’s indecency standard was not “arbitrary and capricious” and therefore was allowable.

Rodney A. Smolla, a First Amendment scholar who is president of Furman University in Greenville, S.C., said that the Supreme Court had been clear in ruling that when the government created rules about what a person could and could not say, “you have to be very specific about what is in bounds and what is out of bounds.”

“This decision demands of the F.C.C. that it regulate with precision and not use general terms like ‘indecency,’ ” Mr. Smolla said.

Before 2004, the F.C.C. consistently held that occasional, spontaneous use of certain words that were otherwise prohibited did not violate its indecency standards. But as complaints multiplied over the celebrity obscenities and the Janet Jackson episode, the F.C.C., under Michael K. Powell, then its chairman, tightened its standard and Congress increased the potential fine for indecency violations tenfold, to up to $325,000 per episode.

Tuesday’s decision takes the F.C.C. back to the Supreme Court’s ruling in 1978 in F.C.C. v. Pacifica Foundation, which upheld the commission’s finding that George Carlin’s classic “seven dirty words” radio monologue, with its deliberate and repetitive use of vulgarities over 12 minutes, was indecent. At that time, the court left open the question of whether the use of “an occasional expletive” could be punished.

In 2009, when the Supreme Court first rejected the appeals court’s ruling, justices, including Clarence Thomas, who was in the majority of the 5-4 decision, and Ruth Bader Ginsburg, who dissented, indicated that they had questions about the First Amendment issues in the F.C.C. indecency policy and whether existing standards were still relevant.

The appeals court picked up on that theme in Tuesday’s decision, noting that the media landscape was much different in 2010 than it was in 1978.

“Technological changes have given parents the ability to decide which programs they will permit their children to watch,” the appeals court said. Noting that it was bound by the Supreme Court’s Pacifica decision, the court said that it nevertheless wondered why broadcasters were still subject to restrictions that, in the case of cable television, would be found to violate the First Amendment.

Ted Lempert, president of Children Now, said that while the court’s decision was troubling, it also emphasized the need for clarity about broadcast standards. “It’s of concern because the F.C.C. has been a critical protector of children’s interests when it comes to media,” he said, adding that he expects that the commission will try to construct a more targeted approach to keeping indecency off the airwaves at times when children are likely to be watching.