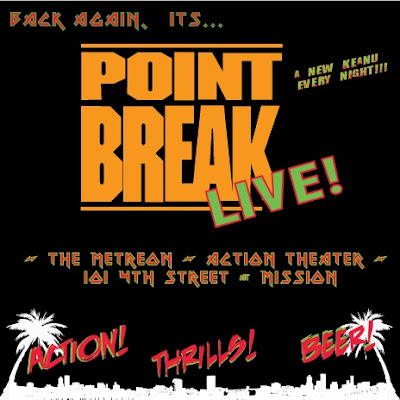 Yes, L.A. is where the action went down in Point Break back in 1992, and it's happening all over again with a new twist. Point Break LIVE!, the Brechtian blockbuster which garnered a "Seattle P-I Best of Seattle 2004" award, as well as rave reviews across the nation, tells the story of former college football star Johnny Utah -- Keanu Reeves in the film -- who goes in pursuit of the surfing, bankrobbing, skydiving, bare-hand-fighting adrenaline-junkie-cum-Zen-master Bodhi Sattva. The show features armed robbery, big-wave surfing, car chases, explosions, and no less than two extended skydiving sequences.

Best of all, the starring role of Keanu will be selected at random from the audience each night, with the lucky winner reading their entire script off of cue-cards. This method manages to capture the rawness of a Keanu Reeves performance even from those who generally think themselves incapable of acting.

***Opening night will be a benefit for the UCSF Pancreatic Cancer Reseach Center in honor of the life of Patrick Swayze.